(Trying To) Make Friends With Flats!

Straight up: My feet are kinda killing me these days. Maybe I need to schedule more foot massages at Glen Ivy or Massage Envy. Maybe I need to speed walk less while wearing heels. Or maybe, just maybe, I need to wear flats more often when I'm not out on the town or dancing the night away.

I remember years ago reading the "editor's letter" from Kim France, while she was still head of Lucky Magazine (the awesome founding editor, actually), in which she talked about the plethora of cute flats available and how the comfort of a shoe is important. But I don't remember much else about that particular editor's letter, because I didn't want to think about (the horror!) the day when I may rarely want to wear heels. Or that my feet may finally have enough one day, and I feel forced to donate my dear heels to the Goodwill.

So before it gets to a point where flats are a necessity in my closet, I have decided to give my lil 'ol feet a rest  here and there. And just when I was really pondering the idea of wearing flats more often while at work, I came across the most cutesy, Betsey Johnson-ish, Tarina Tarantino-ish, Barbie Doll-ish peep-toe flats. So girly and cartoon-y with the plastic pink bow I could not resist. And ummm, they were like $13 on sale at Ross. After slipping them both on with ease, and trying to scuffle along with that plastic sensor thingy holding them together as a pair -- it was a no-brainer. I needed me a pair of these flats by Poetic Licence, a London-based shoe company. 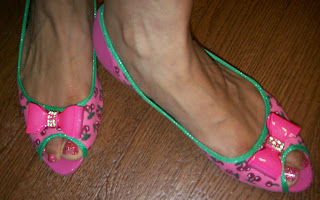 In order to be, or at least appear, authentic, it's important to purchase items that feel as though they were designed specifically for you. And with these flats, I believe this to be true about me. The combo of pink and green, with little red cherries all over, naturally epitomize the happy-go-lucky side of my quirky personality.

I love a pop of color with all black, so the first time I wore these shoes, I paired 'em up with a black sundress at work. Tons of the gals in the office, at Plastic Surgery Studios, were even drooling over them. OK, I'm exaggerating a little, but Virginia and Emma, two rad Internet marketing specialists, admitted to really liking them. I never make purchases based on my hopes for compliments (and I would hope that you don't either!). But sure, it felt good knowing that this shoe was attention-worthy as it became a fun point of discussion. Virginia and I even checked out the Poetic License website together really quick...oooohing and aaahhing.

Now that I'm loving my new pair of shoes, I think I'm really going to try and make friends with flats. I mean, they aren't my enemies, and my friendship circle can most definitely widen up to include them. So tell me, which designers do you think make the best pair of stylish flats? Please comment!! Like seriously, I may take you up on some of your recommendations and feel inspired to write about chic footwear that won't kill your feet. We'll see...

*Please ignore the steroid-vein-like quality to my feet. I'm not sure what's goin' on...They're just muscular. Yeah, that's it...

Wow! You just scored the holy trinity of shoes imo. Stylish, bargain and flat! I've always been a fan of flats. It may be because I'm 5' 10" and don't feel the need to be taller. But I think it was because I had to wear pumps for work as a high fashion model and associate wearing pumps with work. lol Extreme shoes are fantasy footwear that I enjoy looking at on the runway but love myself too much to put my feet through that. Steven Madden always has loads of stylish flats.

Hi Jamil! Thanks for commenting. Wow, how I'd give to be a few inches taller. I'm 5'4. I am now taking on your thoughts: "I love myself too much to put my feet through that." Taking a break here and there feels good.

Oooh, I love Steve Madden footwear! Thanks for the tip. I'll definitely be on the lookout for great deals. :-)

I was thinking about my favorite shoe brands this weekend as I was visiting the holy Mecca (aka DSW) and I compiled this list in my head:

Steve madden, bandolino, nine west, Liz Claiborne, Sam and Libby (I have quite a few flats from them) and by far- my fave- is Jessica Simpson. Girl can't act, but damn, her shoes rock :) I have yet to encounter any Jessica Simpson flats, but I'm sure they're just as comfy, if not comfier than her heels. Good luck!!

You're right Emma! DSW IS the holy Mecca!

I am a major fan of Nine West, always have been fond of their quality. Oooh another one for Steve Madden flats! I better try. I forgot I have a pair of red loafers by Vince Camuto...and they are totally comfy. I think I need to try more of his flats. Thanks for the leads (and your feelings about the girl-who-can't-act-but- provides-an-awesome-shoe- collection!!!)