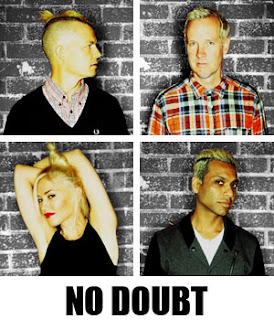 So I've been keeping up with No Doubt's process of working on their new album through the most popular, ingenious, unavoidable method of online communication today: social networking. I love reading Gwen's tweets and  viewing twitpics featuring her, Adrian, Tony, and Tom in the studio. And today, it was the debut of one of their soon-to-be-hit songs ("Settle Down").

For me, and many of my friends who have been fans of No Doubt for more than 15 years at least, it's ridiculously exciting to have good, solid music hit the airwaves. The overall vibe from the media seems to be a "Welcome back No Doubt!" or "No Doubt has returned!" And yes, it's a fact that they have not technically recorded a new album for about 10 years. But there's a major part of creating art that many people forget about, don't understand, or don't always understand its value: the creative process.


I'm assuming that it is only natural for bands to take a helluva long time to make decisions. Maybe a sort of hold period of about 10 years is not the norm for most bands, but from  hiring producers and figuring out melodies to songwriting and rehearsing...the process of creating any art form takes time and conscious effort from everyone involved. And while a new No Doubt song has not hit the radio in some time, they have still remained a band (never broke up), pursued individual interests (producing, guest performing in other bands, fashion design, etc), and started families. Meanwhile, tons of their big hits from other albums have continued to play on major stations -- from pop stations (102.7 KIIS FM) to rock stations (106.7 KROQ).


Yet while I still really don't have a clear picture of what it takes to be in a band, I do know what it takes to create my own sort of music through writing. Gathering inspiration and finding the right voice is very important. Maybe Gwen and the guys needed the experiences of having kids, getting married, traveling the world, etc. to find the right voice for this album. I respect the years it has taken to give us, the world, a new result of their hard work. Point blank: No Doubt is amazing at what they do, and because I'm sure their wheels were turning throughout the years, I don't believe they ever left. Their physical presence is simply more visible now. Now CHEERS to that!

I love returning to a band's roots to truly see how much they've grown and how far they've come. That said, you gotta check out this 1990 No Doubt interview clip I found. You gotta! It is said that this is their first television appearance. Totally unpolished and real.


For a more polished interview from the famous, fully established, Orange County-based band, tune in to E! Entertainment tonight at 8 p.m. ET/PT for their exclusive interview with Ryan Seacrest. New album set to release on September 25th! For updates and other fun stuff, be sure to follow the band on Twitter.

Love it, can't wait to see what you do next! Come check out my blog, maybe we can follow each other!
Material Fixations

Oh yeah, NO DOUBT about that!

Heard they are rocking it out!