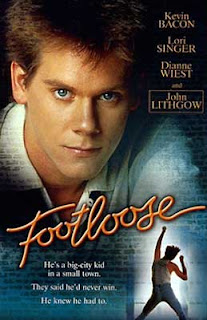 It's 2011 -- 27 years since my favorite '80s flick "Footloose" hit the scene. For those of you who are unfamiliar with the original 1984 film, starring Kevin Bacon, you may want to see what it's all about. 'Cause in a nutshell, it shows how persistance can get you to where you wanna be.

It's basically all about a big-city kid who moves to a small town, only to be confronted with religious, uptight folk. Once he realizes that the minister (John Lithgow) has put a ban on dancing, "Ren McCormick" (Bacon) takes a stance and gathers his high school buddies to fight for their right. And that's what they do. My favorite scene to date is when Ren attends a City Hall meeting, with the minister leading the discussion on why dancing is not allowed (it can lead to sin). Ren explains that dancing is a form of expression and that they shouldn't have their rights taken away. Although his campaign has the town in an uproar, Ren does not back down, eventually seeing his way through. The finale: he makes a school dance happen with the permission of the minister.

Sorry -- I may have killed it for those who have never seen this movie and maybe planned to. But with 2011 here, marking a time when many of you are trying to make your resolutions come true, I must give a shout-out to this movie. It shows how speaking up and standing up for what you believe in can actually create positive results. Ren took the necessary routes to make things happen.

Yes, my blog is still dedicated to fashion and shopping, but the idea that one can truly make a difference should be a universal understanding. Making a difference, no matter the industry you work on, is something that all of us ultimately strive to do. So this is my "Happy New Year" movie -- a film that I belive you should take the time to watch. And oh yes, you will most likely be on your feet dancing to a fun '80s soundtrack. Think "Let's Hear it for the Boys" (Deneice Williams) and Kenny Loggins' "Footloose."

So make it a good year, and take what you need from this movie. You're bound to feel pretty motivated and inspired at the end -- feelings that help to catapult change.

This is by far one of my favorite movies, I remember my best friend getting the soundtrack for her birthday (a cassette tape by the way. We would listen to it non stop dancing and singing. Thanks for bringing back a great memory!!!

You are very welcome Steph! lol...I have the VHS tape.

I'm all for classic old movies, but I recently saw two new movies that are also about determination. Both The King's Speech and True Grit are wonderful films that I recommend (and will probably become classics in the future to be seen again and again).

Hehe - classic! It's years since i watched this, might have to dig it out this weekend! Thanks, you've totally reminded me how much a love it! xoxo

Glad it brought back good memories Jo! :-) And Deborah (mom), thanks for mentioning these movies. I'll have to check them out!