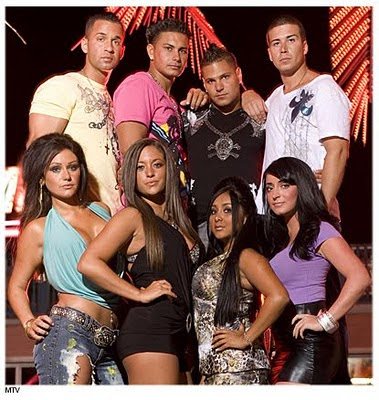 Tan skin, big hair, tight clothes. That's what the cast of MTV's "Jersey Shore" has become famous for. Their over-the-top personalities are worth taking note of too. Whether we laugh or make fun of their styles and/or antics ("beat the beat"), you gotta give credit to the fact that they are being true to themselves. Fashion rules are not the same for everyone, after all.

Tonight, as I watched the gals being interviewed during MTV's pre-show for the movie awards, as well as their new music video with Enrique Iglesias (yes, really!), I found myself smiling. Who woulda thought that the kids who are all about "GTL" (gym, tanning, laundry) would shake up the world of pop and entertainment. Now, with season two of "Jersey Shore" coming to MTV, showing fashion styles that probably make most industry professionals and critics cringe, we can only wonder if the hype will continue...

I don't know why I just love Snooki. Maybe she's a side of me I suppress.

Whenever the come to LA they party at a vlub by my apt. I always see it on all the entertainment shows. Aside from the three main characters I wouldn't even know if I saw them!

This show is my guilty pleasure. I admit it! lol