Who is Your Favorite Housewife? 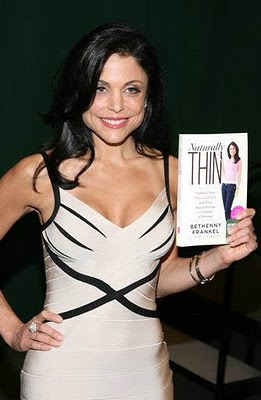 So if you've never tuned in, and you are the kind of gal who likes watching drama unfold between so-called friends, while staying the heck out of the way, well, I think you might get a kick out of these shows. Airing on Bravo, this network shuffles between cities each season, and right now The Housewives of New York City is on Thursdays at 10 p.m./pac time. Maybe I'm the Good Girl Gone Lame for keeping up with such antics, but I KNOW that I'm not alone.

So I ask you, who is your favorite housewife? Mine is Bethenny Frankel of the NYC cast. She's an author, a chef, and she ain't afraid to speak her mind. I love this potty mouth!

And who is the biggest train wreck amongst all seasons? Well, that's too hard to point out...

I love Bethany, I really think she is the only one who works hard and is a real person. As for the train wrecks oh there are so many but the worst is Romona...have you seen her facial expressions OMG to funny!

So I still think Kim of the Atlanta cast is quite...hmmmm...what's the word. Just interesting, I suppose...lol...Ramona? I see where you're coming from!

I love the OC, I guess because it's familiar--the location not the riches haha. They put Housewives on the map. New Jersey was the funniest though haha!

What about the rumor of Beverly Hills? That would be awesome!