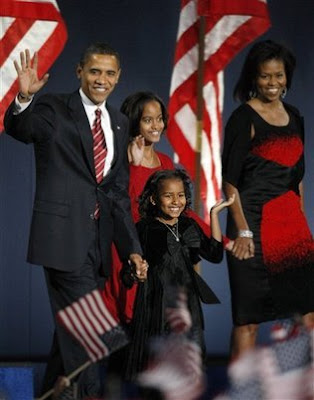 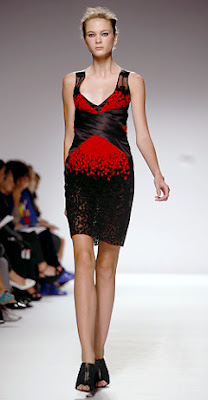 Barack Obama is the new president elect. My family, friends, and I were text messaging each other throughout his acceptance speech, because we are beyond elated. I believe we are all pleasantly shocked and excited to have hope again.
Then his family joined him on stage, and my mouth dropped to the floor.

Yes she did (create a distraction).

Sitting on the couch together proudly watching a moment of history, I turned to Steve and we both gave each other a look that said, "What is she wearing?" (OK, well I might have shouted that out myself...)

Wearing a Narciso Rodriguez Spring 2009 design, Michelle Obama and her daughters joined her husband on stage as the multi-ethnic crowd continued to cheer. But with such an eccentric and bold contrast of black and red; the dress stole my attention away from the gravity and words of Barack Obama. So much to the effect that thoughts were racing through my mind, such as:
- OMG, did a stylist actually choose this for her on election night?
- Did the designer himself give the dress to her as a gift and ASK that she wear it on election night?
- This must be her celebration dress or her "It's going to be OK" dress if Obama lost
- Is she inadvertantly telling America that there's a new fashionable First Lady in 'da house'?
- I just know the media, bloggers everywhere, and E! News is going to be all over this dress!
- I would have worn something more subdued because I don't want to take away attention from my husband's win...
- Who am I kidding, she does look pretty fabulous!
- There's a time and place for every style, and election night wasn't the time to focus on fashion...OMG, what I really saying?
- She and her famly all blend nicely -- the red and black theme.
But overall, I summed it up in my mind as this: Michelle Obama's style that evening told me that just as politics is risky, so is fashion. While many people enjoy blandness, sameness, and lack of substance; shaking the boat once in awhile creates change. And whether people boo or cheer for a certain style or a belief -- change is necessary to make a difference.
...But just maybe, if I were her stylist that evening, I would have asked her to "change" that look and save it for a concert!

Do YOU think the Narciso Rodriguez dress was the right choice for election night?
Photo Credits: http://www.nydailynews.com/
Posted by Good Girl Gone Shopping at 1:12 PM

I don't really like it...it looks like a dress that would be worn to a holiday party...by a lady in her 50s...

I liked the dress she wore, though it would have looked better if she didn't wear the black cardigan with it( i thought it was apart of the dress until I saw the actual photo). I liked the whole red and black theme the Obama's had with their wardrobe, it was cute!.

Thanks for your input Leeann and Ashley-Nicole. Interesting how we all have something to say about it.