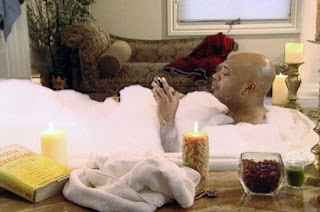 So, the cable guy never showed up at our new apartment Thursday a.m., which leaves Steve and I peeved, to say the least. Our favorite shows have been missed, and I truly feel out of the loop. Fortunately, he (or she) is schedule for this Monday on Labor Day, between 9 and 12. Apparently they screwed up on the last digit in my phone number: whateva.

Well, luckily they are knocking off half of our first month's bill. Yay! But still, very sad on what I've been missing (or not even sure as I'm also out of the loop on schedules and premieres), such as:

- The Janice Dickson Modeling Agency
- Run's House
- E! News and The Daily 10
- The videos early morning on VH1
- I Love Money
- Bad Girls Club (Is that still on?)
- The Devil Wears Prada (I know it's a movie, but it was played on HBO day in, day out, and I looked forward speaking with Anne Hathaway, as I now know the words to the movie.)
- The Hills on MTV (Love Whitney!)

I never realized how much TV I watch or listen to when I'm on the computer. So far, I've managed. While it is quiet and peaceful, I also miss the activity and becoming part of other worlds for awhile...

What are YOUR favorite shows, and how would you cope if you went 2 weeks without those stations?
Photo Credit: http://www.mtv.com
Posted by Good Girl Gone Shopping at 8:43 AM

My favorite shows are: The Office and Ugly Betty. Living on campus, I don't have the same tv schedule as I did at home, but I managed with my own DVDs (including The Devil Wears Prada).

Hey Ashley, it's back! Thanks heavens. Watched some of Diddy's show about finding a personal assistant yesterday, saw "The Hills" last night. I'm back in business! ;)

BTW, I LOVE the Office and Ugly Betty.

Did you get it all hooked up? I know how it is to be missin' your shows. My fav show is 24 and due to the writer strike and whatever reasons, it hasn't aired in almost 2 years! I have been angry about it too haha! But, luckily, it's back this fall!!